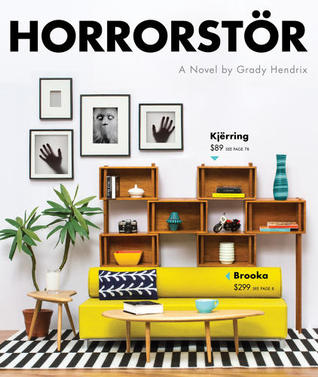 Good satire is hard to write.  Good horror is also hard to write.  Writing both is a nearly impossible task and in HORRORSTÖR, Grady Hendrix almost pulls it off completely.  Set in an Ikea-ripoff store called Orsk, the novel is the story of Amy, a store employee whose existence is that of miserable hand-to-mouth living driven by a desire to get out of the town where she’s lived since she was born and to not move back into her mom’s trailer, which is where she’s headed if she can’t come up with the back rent that she owes her roommates.  Along for the ride with Amy are the childish spinster Ruth Anne, the uptight manager Basil, and their ghost hunter colleagues Trinity and Matt.  Together, they set out to spend a night in Orsk to investigate the increasingly bizarre events that have been happening during their respective shifts.

What follows is a ghost story that under most circumstances would seem pretty straightforward and almost played–the store has been built on a site where an insane asylum run by a warden who was insane in his cruelty once stood.  But it’s like Hendrix knows this and as a result he spends a lot of time crafting his setting, which is Orsk, and creating a dead-on satire of Ikea and its furniture and lifestyle that we have come to know and … love?  The book, which has illustrations by Michael Roglalski, is laid out in places like a furniture catalogue, with each chapter being titled after a fake piece of Swedish-inspired furniture (and then later in the novel as things get more bizarre, catalogue descriptions of torture devices).  Hendrix goes deep with building that world and has his group of oddball employees inhabit a world that feels like a retail job where some are trying to make something of themselves while others are perpetually fed up.

The horror portion of the book is also solid, although I will admit that I think Hendrix could have used 20-50 more pages of story because I felt like the book’s pacing sped up way too quickly toward its ending even if it did keep me engaged, entertained, and even amused.