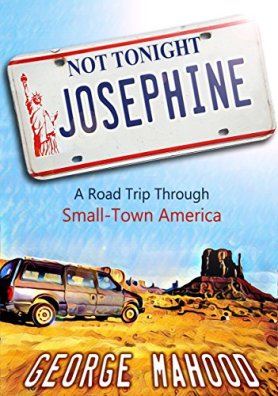 I’m a sucker for road trip books, especially those that involve a journey across the U.S.  I think it’s because I’ve always wanted to do a cross-country trek and even in my younger years never got or took the chance.  Anyway, I’ve read a number of the classic trek tales: Steinbeck’s Travels With Charley in Search of America, William Least Heat-Moon’s Blue Highways, and even Kerouac’s On the Road (which, if I’m desperate, may get its own episode one day).  I even have had the chance to dig into less well-known works, such as the outstanding book Cross-Country by Robert Sullivan.  So, when Amazon offered up George Mahood’s Not Tonight Josephine at a deep discount (either $.99 or $1.99), I added it to my Kindle.

Mahood is an English travel writer who has written a number of other books and in this one, written in 2016, he recalls a road trip that he took in 2000 across the United States and back again, partially with his friend Mark and partially with his girlfriend Rachel.  The conceit is that he was going to land in New York, find a cheap used car that he could buy outright with cash, and take that car throughout the country.  The car he finds is a decaying 1989 Dodge Caravan that a previous owner had named Josephine (hence the title) and that causes him much more trouble than the money he paid for it.

The book reads pretty quickly and Mahood is a relatable narrator, or maybe I thought that because I am around the same age and 2000 was one of the first years in which I was completely on my own, having moved out of my parents’ house in the fall of 1999.  So unlike a number of years prior, I remember a lot of the cultural and political landscape (which he comments on) very vividly and reading about this trip 18 years after it took place did make me think about how different (and similar) our society now is.

There are times where Mahood gets a little too into his personal life–his relationship with Rachel, for instance–and his descriptions of some of the places he visits does suffer for that.  But he makes up for it in some of the sillier anecdotes and episodes, like an entire section of the book where he is working at a B&B in Breckenridge, Colorado while also doing deliveries for a take-out service.  It was solidly entertaining, even though I do think that it had more potential than it ultimately demonstrated.

One thought on “Not Tonight, Josephine: A Road Trip Through Small-Town America”