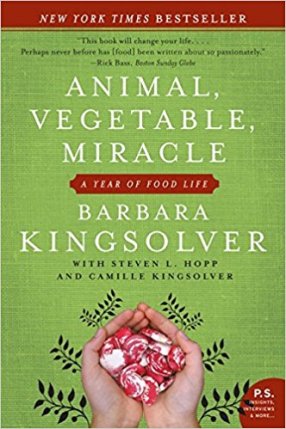 My new year’s resolution being one of using and consuming what I have accumulated with an eye toward my mental health, I’ve also been thinking about what and how I eat and how that has an impact on my physical health. I’m 41 years old as I write this and it seems like my body has decided that it was finally time for all of the mysterious ailments and issues to come about.

And so I come to Barbara Kingsolver’s 2007 book Animal, Vegetable, Miracle: A Year of Food Life. This is one that Amanda bought and read when it first came out and that I’ve been meaning to read ever since but which sat on the bookshelf (as these books tend to do). Spurred on by a conversation with my therapist where she recommended the book, I grabbed it and began reading shortly after New Year’s Day when all of the resolutions were taking hold.

The premise of the book is that Kingsolver is writing about a year where her family lived on a farm in Virginia and would live off of their own land as completely as they could. This meant that they grew their own food or purchased locally grown food (with some exceptions such as grains and olive oil) and also ate seasonally. It falls into the category of memoir but also has its fair share of education and information. Kingsolver talks about the history of some of the food she is harvesting and provides commentary on contemporary American culture. Her husband, Steven L. Hopp, and daughter, Lily Kingsolver, also contribute with Hopp delving into the political and economic side of the issue and Lily covering the project from the perspective of a college student.

The book is both fascinating and tedious. Kingsolver’s style is very easy to read but is also deliberate at times. I didn’t feel like she was preaching to me, but at the same time, it would have been preaching to the choir because while I don’t grow my own food, I’m not adverse to eating fruits and vegetables and already get a weekly share from a local CSA.

Still, the book provides a valuable service in the family’s wish to eschew the modern-day eating habits of Americans and their commitment to eating deliberately harkens back to Thoreau’s efforts to live deliberately in Walden (a book that I found incredibly tedious when I read it in college but may reconsider). The book is now available in a tenth anniversary edition that has an added chapter and I’m honestly curious as to how the family has stayed with its commitments.

This took more time to get through than I had expected and some of the information does seem to have become common knowledge in recent years, but it’s still a fascinating look at what and how we eat.

1. You’re interested in the local food movement
2. You enjoy Walden or other similar books
3. You are curious about what healthy eating or living actually means.

One thought on “Animal, Vegetable, Miracle by Barbara Kingsolver”